I was born on April 6th, 1973 in Muenster/Westphalia. After my A-levels and an apprenticeship as a wholesale and foreign trade merchant, I spent three interesting months in Southern England as a Trainee. Afterwards I worked in international companies in Duesseldorf, Freiburg (Breisgau) and North-Germany. Now I am living at the edge of the Black Forest together with my husband and our three children.

In 2016 I finally started writing, when I took some time to put ideas for children’s books down that had been in my mind for years. In 2017 a short story and a fairy tale were published in the anthologies of two publishers. In 2018 my humorous debut novel “Watson’s World” and two more short stories followed.

Since 2019 I am represented by the → agency Ashera.

My second novel “The Ghosts of Christmas Retire” was published by Ashera Verlag in November 2020. It is a humorous resumption of Charles Dickens’ “A Christmas Carol” set into the 21st century. Further projects will be added regularly under “Publications”. Have fun browsing! 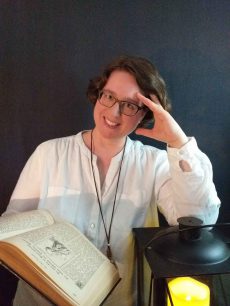